Historic Downtown Campbell: Part 2 of 2. Start with the Campbell Historical Museum, then come read about the Ainsley House. 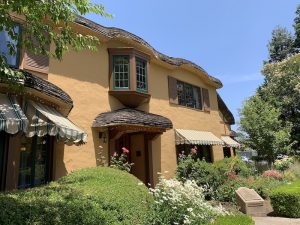 The Ainsley House is the historical home of Mr. John Colpitts Ainsley’s family. He was one of the businessmen who put Campbell on the map through his successful fruit cannery. When you tour, the docent will share with you about the Ainsley family, California life in the early 1900s, the mixed architectural styles of the house, and the innovative technologies (innovative for their day, that is) incorporated into its design. You’ll walk through all the rooms with your docent and then get to explore the surrounding gardens on your own. 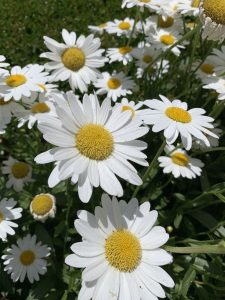 As you learned at the Campbell Historical Museum, Campbell’s fruit orchards and canneries were a huge industry in this area for a long time. Mr. Ainsley owned one of those canneries. He was born in England and moved to California at age 26. He wasn’t born wealthy, but he did see the potential to build on the existing apricot farms in this area, so he started a cannery company and became very successful. He built this house for his family later in life and lived here until he passed away in 1937. His children eventually donated the house to the City of Campbell as an historical site. It’s now on the National Register of Historic Places. 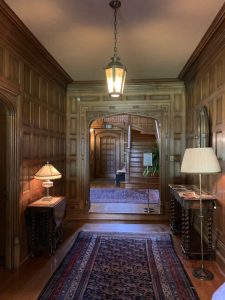 This house has many interesting architectural features and details. It also showcases “newfangled” things we take for granted today, such as an electric refrigerator or an upstairs telephone. On this guided tour of the home, you’ll learn about all of these ideas and about a family’s lifestyle in that era. Keep your eyes open for the magic button in the dining room… 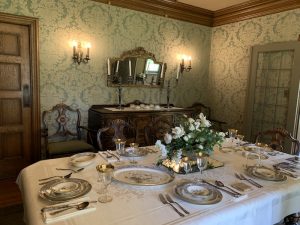 Believe it or not, the house was not always on this site! It was originally built where eBay’s main campus is today. In the 1990s, it was literally picked up and trucked more than a mile to the city park land where it sits today. Wow! We were actually lucky enough to see the move happen. (I was very little but I still remember it.) When you visit, you’ll get to see a short video of the move before touring the house. It’s amazing!

The Ainsley House is located at 300 Grant St. in Campbell. It’s adjacent to the Campbell Public Library and City Hall. It’s about a block and a half over from the main Campbell Avenue corridor in Downtown Campbell, and not far from the Hamilton Ave. exit from Hwy 17. 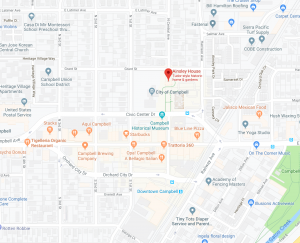 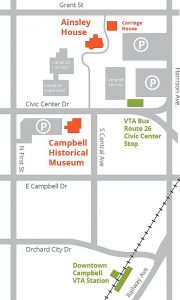 Downtown Campbell is very bicycle- and pedestrian-friendly, so if you prefer, you can always choose to bike or walk here to avoid the parking drama altogether.

When you arrive, the sidewalks and the house’s grandeur will naturally lead you to the front door, but follow the signs from there to the carriage house where you buy tickets. Inside the carriage house, you’ll watch about a 5-minute intro video and then meet your docent, who will take you through the main house. 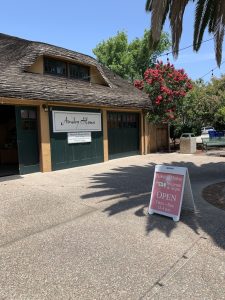 The house has been retrofitted with central heating and air conditioning, so you can plan your visit any time of year.

In the spring and summer, the gardens around the house are particularly photogenic. They actually do weddings here because the space is so beautiful, so be sure to bring your camera! 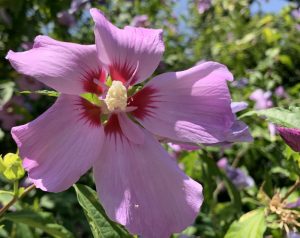 When we visited (summer 2019), the Ainsley House tickets were $8 for the general public, $6 for seniors, and $4 for youth ages 7-17. Children 6 and under were free. If you purchase a joint ticket with this and the Campbell Historical Museum, you can save $1 per person over purchasing the tickets separately. 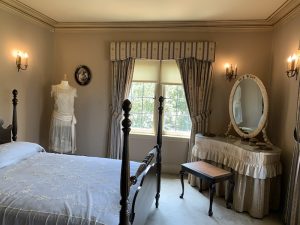 There are also membership options as described in our Campbell Historical Museum post:

If you want unlimited access to the museum and the Ainsley House, a quarterly newsletter, gift shop discounts, and free or discounted admission to museum events, memberships are available for $35 per person. Expanded benefits are available with fancier levels of membership.

Both this museum and the Ainsley House are part of the North American Reciprocal Museum (NARM) Association. This means you can get  free or discounted admission to these and many other museums around the continent if you have a membership at one of them. You can search the full list here.

The tour is led by a docent, so the length of time can range from 30 minutes to easily over an hour, depending on the level of detail they share and the number of questions you ask. Combined with the Campbell Historical Museum, allow 2.5 to 4 hours total. 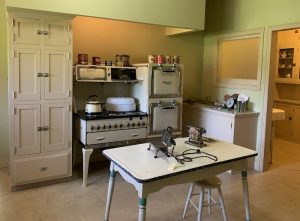 Their website has information for guests with disabilities. The house was built in 1925, so there isn’t much they can do to make it wheelchair-friendly, unfortunately. The main floor of the carriage house (which serves as the visitor’s center and gift shop) is wheelchair-accessible. An accessible restroom is included in that building too.

The Ainsley House itself is two stories, but even the first floor has single stairs up and down from individual rooms. About half the rooms on the first floor are wheelchair-accessible via ramps. The tour involves only short-distance walking, but a lot of stairs and lot of standing. They do have folding chairs available if you need to sit while the docent speaks, but you move between rooms so often that you don’t sit for more than a minute or two in each place. For someone with mobility problems, this house is honestly very difficult. (That’s not their fault at all, they do their very best to accommodate, but the house was built more than 60 years before the Americans with Disabilities Act was passed. What can you do?) 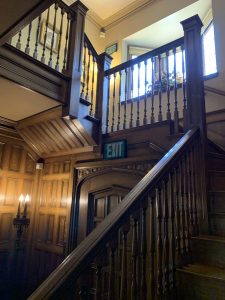 Walkers are allowed, so my mom tried using her walker instead of the wheelchair. It was really tough, honestly. The docent was excellent about making sure to point out the steps and offering to help her up and down the steps if needed. She even offered to carry the walker upstairs if that would help. By the end of the hour-long tour, though, even with sitting in each room as the docent spoke, it was obvious that this was too much walking and standing. Time for Advil and resting the rest of the day. Everyone has their own threshold for when to be stubborn about not missing out on something and when to take care of their health, so of course it’s up to you. Just be aware that this tour involves more standing and walking than it seems like a “house tour” might, so please be gentle with your body if you have mobility issues. 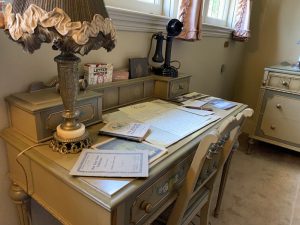 The docent narrates the whole tour, so guests could still get a lot out of the visit without seeing the architecture and artifacts directly. There are also recorded sound effects that play in a few of the rooms. If someone in your party has a sight limitation, you can even arrange a “touch tour” to further enhance your experience if you call in advance. (This is such an unusual offering, I have to give them kudos!)

Guests who are deaf would probably need a family member to serve as a sign language interpreter. Tour groups are usually small (often just your family), so if you have limited hearing, you could ask the docent to speak loudly and could turn your hearing aids up. The house is quiet enough for this to work. 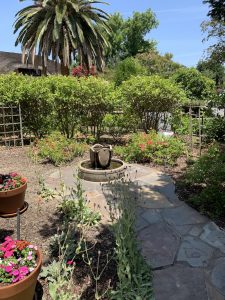 As you might expect for an historical home, the sensory level here was nicely low overall. One very unusual feature was that a few of the rooms had sound effects set up on motion sensors so they played automatically when you entered the room. (For example, a recording of FDR on the radio would play when you entered the library, or cooking and chopping noises would greet you in the kitchen.) These were not loud, but I found them a bit distracting as I tried to focus on the docent’s words at the same time. Still, this is the only place I’ve encountered such a simple but unusual idea — motion-triggered ambient sounds to enhance the experience — and I thought it was extremely clever. 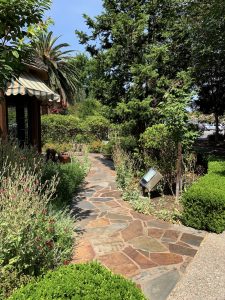 There’s no food or drink allowed on the house tour. There are plenty of benches in the green park area in front of the house for eating before or after your visit.

Would we go back?

Sure! Even though we saw the house move (because everyone around came to see such an unusual event) in the 1990s, we had somehow never come to tour the inside of the house after that. I’m glad we did and would be happy to do so again some day. If you want to put a more personal face on all the cool stuff you learn at the Campbell Historical Museum, wander over to Ainsley House too. It’s sure to make you smile! 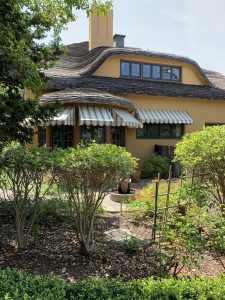